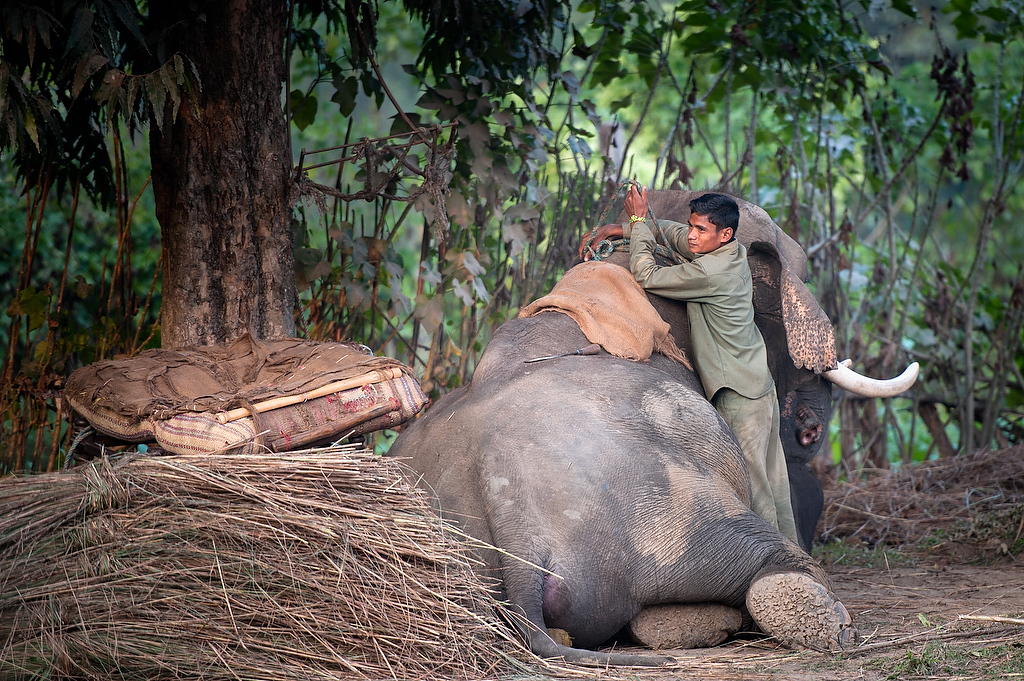 
Chitwan national park was established in 1973 and became World Heritage Site in 1984. Since then it became a tourist attraction for Elephant safari.

It is estimated that 200,000 tourists visit National Park every year. Nepal is home to some 150 wild elephants while number of captive elephants is 208. In Chitwan alone there are 155 captive elephants while number of wild elephants is unknown as there wasn’t any comprehensive research done by the government to establish numbers in Chitwan National park. Most of the 155 working elephants are in hands of private owners. Often elephants are smuggled from India and sold to private owners for 60-70,000 Nepali Rupees (equivalent USD 700-800) Elephants are mainly used to cater tourists for an elephant safari through National Park.

129 private and 90 government elephant mahouts do handling elephants in Chitwan.

Elephant stable, Hattisar Soura, has 16 elephants and 30 handlers. Among elephant handlers there are also two female handlers. It is the state run stable and the government appoints all employees. The stable caters mainly tourists for safari in Chitwan national park.

Elephant handlers live in compound with very basic facilities. None of the mahouts has families living with them in a stable except one whose children live with him in order to attend the school in the village. With the wages not exceeding USD 15 per month, mahouts and their families live on the brink of existence.

Mahouts control elephants by three methods; commands given by voice, those given using an elephant prod, a stick ending in a blunt hook, and by applying pressure with the feet and legs. The prod might be to tap parts of the animal\'s body to indicate the angle of work, the desired direction to move indicated with the feet, and the action begun with a voice command.